Double-header at Harcourt House feeds on fear and control 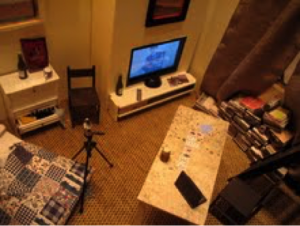 Sitting in her home in Regina and watching a documentary on PBS about suicide bombers, Sylvia Ziemann was shocked to witness the presence of a female bomber. Portrayed as sentimental, seeking revenge for the loss of her family and her children, the story of the female suicide bomber rocked Ziemann, who recognized that it was the form as much as the content that was disturbing her.

Channeling the fear imposed on viewers by an ever-aggressive news media, Ziemann premieres Home (In)Security, her series of voyeuristic sinisterisms that date back to 2005. Included in the array of works is her initial reaction in the form of “Bomber Woman,” a barbie doll figurine with Ziemann’s face dressed up as a suicide bomber. The piece hangs alone, neither contextualized or politically correct, but it is the starting point for how someone far removed from international politics can begin to engage in interwoven issues and identities as filtered through a hyperbolic media.

One piece in the corner shows an elderly woman, Ziemann’s mother, asleep in bed as the sky outside her window explodes with gunfire. Her mother, who grew up in the midst of the Second World War, began having nightmares of being back in Nazi Germany when the Iraq War began being televised. Another piece, “Garage,” recalls news stories and childhood memories of news stories of young girls disappearing from nearby residential neighborhoods, only to resurface months or years later, having been living trapped and hidden beneath secret bunkers.

Fairy tale-like in assemblage, with direct references to folk myths such as Little Red Riding Hood and Hansel and Gretel, the “beware of strangers” sentiment is turned inside out in Ziemann’s worlds, and the looming fear, perpetuated by the media, of our friends and neighbors is here turned towards the mundane. Calling upon our voyeuristic intuition to peer into open windows, each of Ziemann’s model houses appear like any house you would find across the prairies, with detailing down to the weathered couch on the front porch to the rubble and garbage bags strewn beneath. It is only upon our own closer inspection, our need to invade past public and into private territory, where we are satisfied with stories of kidnapping, weapons and bomb preparations, and signs of security disturbances.

Playing off the psychology of fear in collapsing the us versus them mentality of how the media portrays good and evil, the terror is here made mundane, injected into each humdrum isolated house, and calls into question our preoccupation with homeland security and personal security as more fear mongering than actual protection.

In contrast to the insecurities of control in Ziemann’s main space show, Edmonton-based painter Paul Bernhardt’s large-scale paintings play up the folly of control through large-scale impositions across our horizon. Taken from sketches overlooking oil derricks, airport terminals and power stations, Bernhardt finds an internal conflict playing out in three large landscapes that delve into the wretched and the beauty of these overarching mechanics and lifeblood of modern society. Building from earlier works, including his pieces currently in the Alberta Biennial of Contemporary Art: Timeland (at the AGA until August 28), Bernhardt’s landscapes are saturated with textures bleeding out of architectural spectres. His palette distorts what one sees into an abstraction of smells and taste, conjuring sentiments of cool aqua steels and acidic orange rusts.

As a strange, yet comforting complement to each other’s exhibitions, the paired viewing experience of Ziemann and Bernhardt drives home the simple fact that control and security are both decorative illusions. V