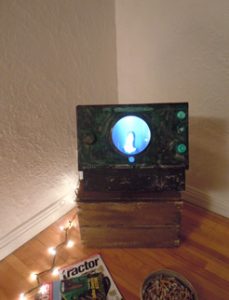 Tales On The Table is real damn ominous

There is something deliciously seductive and mysterious about an agoraphobic hunkered down in the land of living skies.

When I was a kid, storytelling was my television. The adults would tell stories about devils rising out of dirt roads to confront farmers, women running off on their husbands, and other dust bowl forebodings.

My favourite stories were about “Prairie Madness” – farmers who would be driven insane by the wide open expanse of the Prairies resulting in murder or suicide. Or both! Then, the inevitable all-night theorizing ensued on how the inflicted farmers developed this strange malaise, always spoken in hushed tones lest the adults invoke whatever spirit that possessed them.

“Tales on the Table”, now showing at Rob Bos’ Art Projects Gallery until the end of April, reminds me of those childhood stories. The collaboration between Sylvia Ziemann and Shayne Metcalfe is a series of installations that are basically sets for an intentionally unfinished narrative about an agoraphobic named Frank. You can get a sense of the work from the photo with this article.

Except for one thing, there is no untimely end.

The artists make an unlikely pair of collaborators. Sylvia Ziemann is a local artist. She is renowned for her miniatures installations, having shown her work at The Dunlop Art Gallery, Neutral Ground, Truck Gallery in Calgary and Gallerywest in Toronto. Shayne Metcalf lives on acreage in the North Saskatchewan River valley. He is a filmmaker, video artist, director and screenplay writer, and, most recently, developed “Bad Seed” – a tale of mischief, magic and medical marijuana.

Although they both worked equally on Frank’s story, the narrative must have come naturally as Sylvia’s work already deals with alienation and paranoia from within a domestic environment.

Frank has only a mild case of agoraphobia – he’s able to leave his house to go to a café where meets his love interest, a mysterious waitress whom we only see bathed in smoke and darkness. It’s apparent that Frank seeks out a tarot card reader to determine if they have a future together (thus the title of the show).

The rest of the narrative is laid out in clues and metaphors with everything open to one’s own interpretation.

About that video – so there’s a steampunk-ish TV monitor shaped like a porthole, with the image of the sexy waitress (my interpretation) looped over and over again. A chair is in front of it, and on the floor there are some magazines and a hub cap full of cigarette butts.

I’m guessing Frank is a smoker but he doesn’t care what brand he smokes. He doesn’t smoke them right down to the butt. His smoking is more about passing time and less about addiction.

(Perhaps, he only buys them from the café to feel the waitress’s hand as she passes the cigarettes to him?)

Is the monitor a portal into Frank’s obsessive mind, showing his one and only thought?

I’m just playing Columbo here. Nowhere in the artist statement does it suggest such a thing nor did the artists explain anything like that. I’ll say no more about the story. You’ll have to investigate on your own. No spoilers here, sorry.

Is Frank slowly sinking into Prairie madness? What’s with all the digging? And the gas mask? Hmm? If the story is told in metaphor, is he burying his past, digging for the truth, searching for love as a survival shelter?

Okay, that’s it. Go see the show for yourself.

Chances are you didn’t share my childhood about Prairie madness but you can make an interesting comparison of “Tales on the Table” to Tom Wait’s carnivalesque atmosphere albums of Swordfishtrombones or Frank’s Wild Years (There’s also song on Swordfishtrombones called “Frank’s Wild Years”). I’m certain it isn’t the same Frank as this. You can also liken “Tales” to a Nick Cave murder ballad. Both Waits and Cave, worldly musicians that they are, create dark, quirky subject matter with open-ended, dangling storylines. That doesn’t make their work unfinished or incomplete. It creates a raw gnawing hunger for more.

It is rare for any video installation to create that same hunger. I can’t think of anything I’ve seen in the last decade that accomplished that for me, but this show does.

Fear not, because there will be more. This show is just one chapter in a dark, sprawling epic that will likely be played out in a long series of installations in a venue that can accommodate the entire story.

This particular chapter is somewhere halfway through, with a beginning and end yet to be told.

The Art Projects gallery where “Tales” is currently showing is a very cozy space in an unassuming old grey brick building in an equally old neighbourhood. The intimacy makes it the perfect venue for this show. The installations are laid out between two separate exhibition spaces. The smaller space is street level as you walk into the gallery. The other exhibition space is a short few steps up to the second level.

The Art Project Gallery is located at 1401 11th Ave. far from the maddening crowd of the downtown arts scene. Along with the gallery, we have Korea House and couple of pawn shops. What else could one need on one lonely avenue? A coffee joint, that’s what. I’ll bet that’s why The Artful Dodger Café and Music Emporium opened up shop.

Rob Bos is quite the accomplished artist himself. He possesses a passion about art. He talks, eats, sleeps, makes love to it each night and wakes up to it every morning. We can thank Rob Bos for making 11th Avenue cool again.